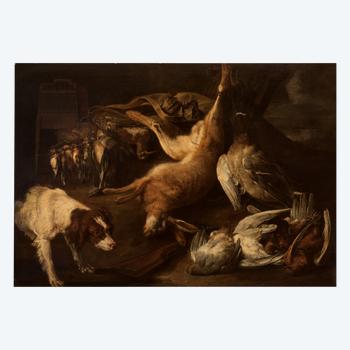 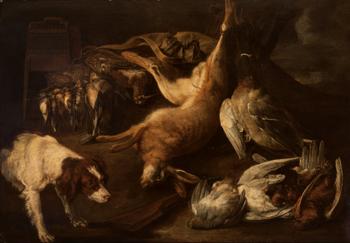 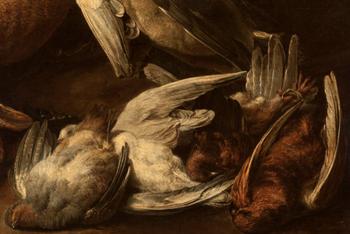 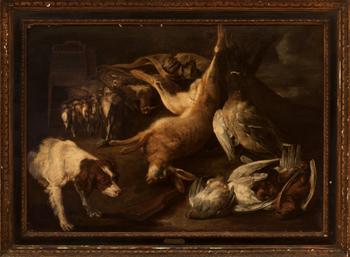 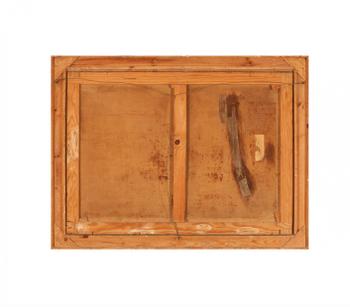 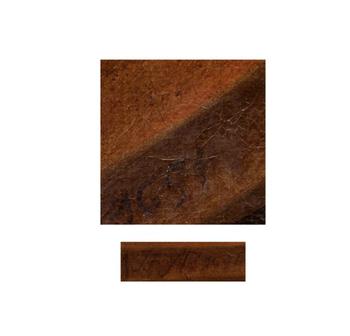 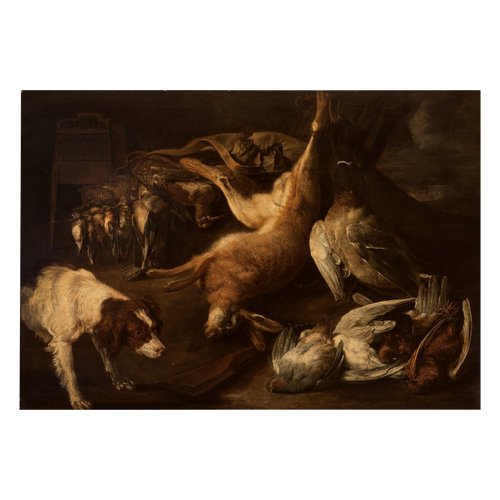 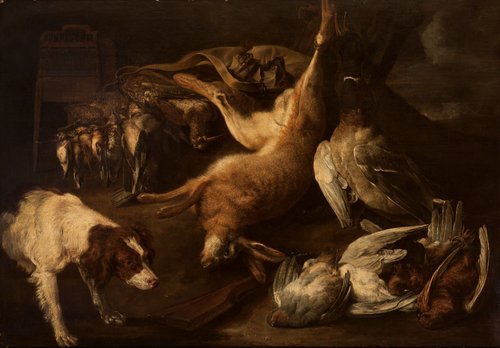 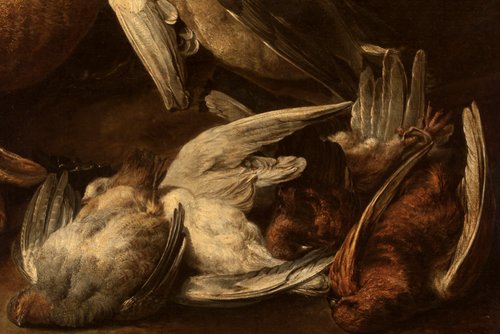 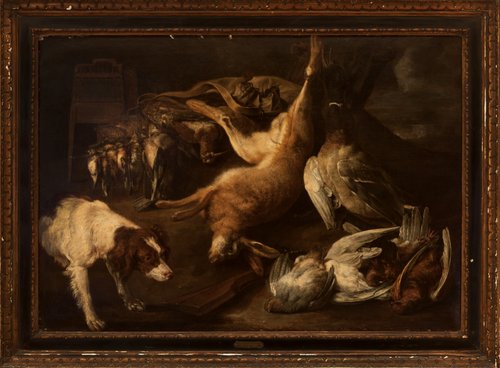 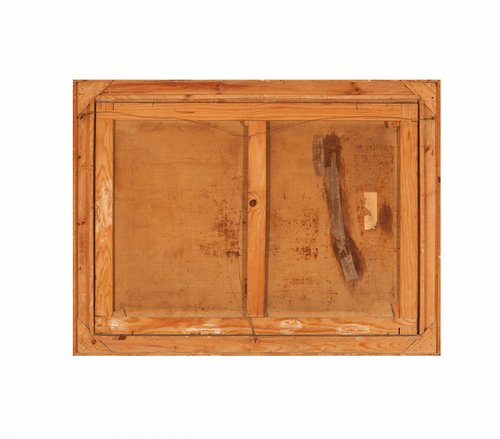 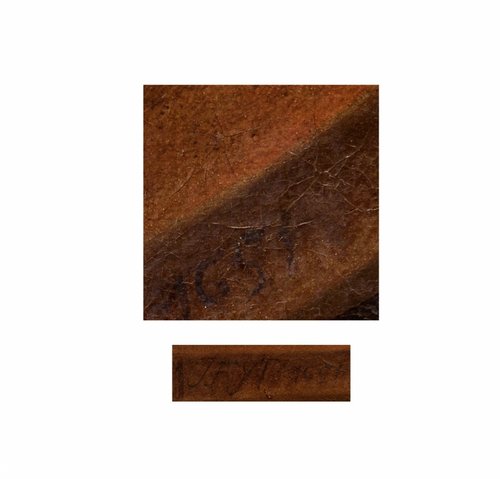 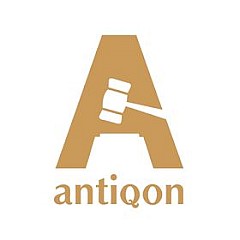 J. FYT. "Still life with game" Oil on canvas 103Х135.5 cm. Signature lower center. 1651.
Work presented is attributed to the famous Flemish painter and printmaker Jan Fyt (1611-1661) as part of a later series of hunting scenes created by the artist.
A monumental canvas in the style of the Flemish novelists is constructed as a circular composition of a game of bat with a dog and around the diagonal of a hare and a gun. The living and the dead in the circle of being are presented as trophies of excitement and experience of understanding life. Our agent, a hunting dog, - a genuine interest in life unwittingly rests and is compared to a dead hare. You cannot escape death. The contrast between the desk of an abandoned cartridge belt and a barely visible shrine in the upper right corner is also revealing. It is the sacred opposition of wine and the Eternal. The apparent power and the power of fate. High moral, ethical and human experiences are the characteristic mark of Flemish novelists in world art.

The painting consists of many details inherent in the artist on the subject of hunting. First of all, we can notice the hunting dog located on the left side of the photo, looking at a dead bird lying on the ground, thus hare suspended by the paw located in the central part of the photo. Figures of animals and birds were created by the artist in a surprisingly realistic way. This work is distinguished by the decorative effect of the composition, the sophistication of the golden color, rich in tonal transitions and nuances of color, the virtuoso transfer of the silky plumage of the birds and the texture of the animal hairs depicted in the photo. The contrasts of light and shadow that cross the presented elements of the image help to give them more plasticity and dynamism, which is also facilitated by the inclusion of vertical and horizontal lines in the part of the interior elements depicted on the image, the pistol and the silhouette of a tree placed in the background of the work. Unusually large, highlighting the chosen theme of a successful hunt.
On the butt of a hunting rifle represented, placed on the ground in the central part of the painting, the artist affixes the signature of the author J. FYT as well as the date 1651.
The painting undoubtedly has artistic and historical significance, being a prime example of the work of artist Jan Fyt during his life in Antwerp.
Dimensions of the canvas: 84.5 x 118.5 cm.
The canvas is duplicated. Traces of damage to the canvas are visible, as well as traces of previous restorations.
Historical reference:
The depiction of still-life "hunting" compositions with weapons and slain animals was one of the favorite themes of the works of Dutch artists of the 16th-17th centuries, which served as the backdrop for the walls of hunting lodges and castles. of the European nobility.
The hunting trophies testified to the bravery of the owners of the house. The entourage of the heads and skins of slain animals, which were attached to the castles, was successfully supplemented by picturesque compositions with hunting scenes and hunting still lifes.
The hunting still lifes created by artists of the 16th and 17th centuries were a kind of message to the world into which the authors of the works put the meaning and deep symbolism of that time. 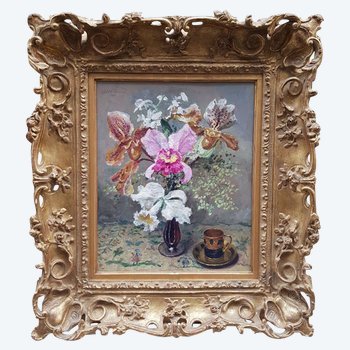 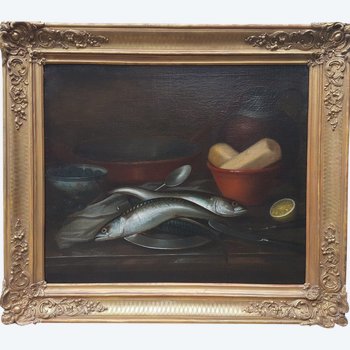 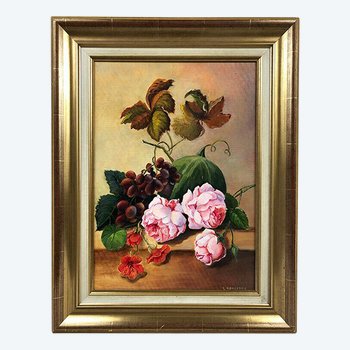 Flowers and fruits, oil on canvas board twentieth 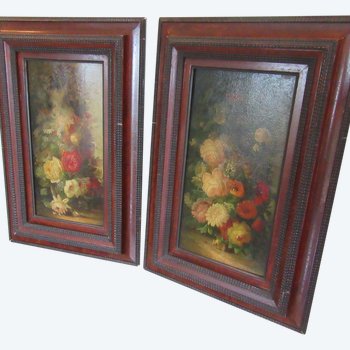 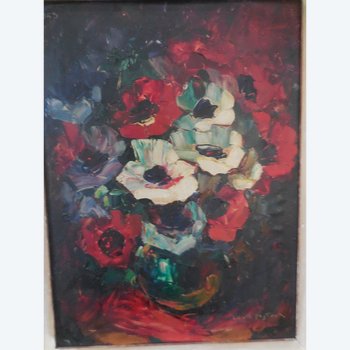 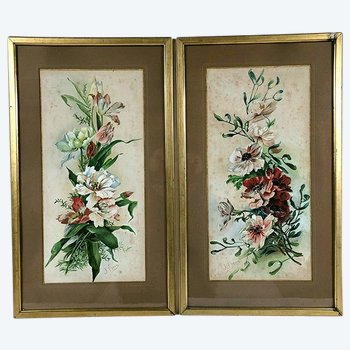 Pair of watercolors, bouquets of flowers. Around 1900 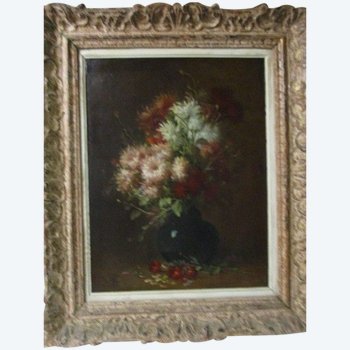