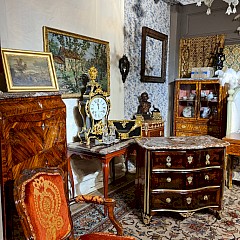 This beautiful secretary is a regional work that can be dated around the years 1770-80, made in a Transition style, mixing Louis XV and Louis XVI, we find there decorations used by the Parisian cabinetmaker with in particular the motif in marquetry of cubes bottomless dear to Jean François Oeben and the Greek motif used by many Parisian masters inspired by the return to neoclassical, it is therefore under the influence of capital that this piece of furniture was made, we note that from a great regional cabinetmaker, we took up these different patterns, notably Jean François Hache in Grenoble and Abraham-Nicolas Couleru in Montbéliard,
This piece of furniture is topped with a molded marble top adorned with bronze composed of 1 keyhole for the flap, a small entrance for the bottom door as well as two slippers marked with the crowned R
Corresponding to a low cabinet with a total height of 121 cm, this work unit can come under the name of support unit, adopting a stocky proportion conferred by good width. This secretary volume is found with Jean François Hache as with Parisian cabinetmakers, there does not seem to be any in the production of Couleru.
The distribution is very common, the bottom, opens with two leaves revealing a shelf, the upper part, opens with a large flap, scalloped which reveals once open the writing part lined with a beautiful and old fawn-colored leather, nicely. cut to the shape of the flap and underlined with a golden border with a small iron, a little additional refinement, we note that the palastre of the lock is also covered in leather, the interior box is composed of two rows of three drawers distributed on either side of a housing and a larger central drawer, there is also a half-deep shelf in the back of the theater, this interior arrangement is made with oak, the color of which is very golden, the 'cabinetmaker took care to cut his frontage in a curve that is frequently found on louis xv secretary, we note a particularity in the manufacture of drawer fronts, the master craftsman is served with a thick section to realize r the fretwork of the facing and kept the maximum thickness in the backing for the dovetail assembly, in order to obtain a most pleasant visual it proceed to an elegance in the upper part of each drawer front in order to to obtain the follow-up of the curve.
The cabinet body is orthohedral in shape, with rounded front angles and then hollowed out with a large chamfer, these front uprights end with small arched feet, the low cross member that unites them is finely scalloped in a symmetrical manner,
The 3 front leaves are applied by a small finished covering of a quarter round, the hinge of the bottom doors is on a larding sheet, the flap in an unconventional way is hinged, generally the Secretary flaps are positioned on right pivot.
The decoration occupies the front of the cabinet, the lower doors are covered with a bottomless cube marquetry as in trompe l'oeil, in a frame of nets connected to the Greek, the flap also offers a decoration of the same aspect in trompe l'oeil. the eye interrupted with a pattern with the attributes of music composed of instruments and intersecting foliage branches, held by a wrapped knot, on either side of long openwork rooster crest pattern interrupt the background play, these two pattern made in dark wood in order to stand out from the background recall the bronze decorations applied as an applique that can be found in particular on the Louis XV chest of drawers, all this decoration is in a frame of tinted wood net connected to the four angles with Greek-style patterns with multiple combinations.
Corresponding to a regional work the cabinetmaker to use country wood, we find walnut arranged in curling and composing the background but also sycamore, tobacco tinted maple, holly, the cabinetmaker also use only wood tinted in different shades of green for foliage and Greek net, there is also wood tinted in shades more blue which remains rare and which served to emphasize the small drums, we note that the veneers are thick and tinted well in depth, this type of work is found in particular at Abraham-Nicolas Couleru known for the thickness and the quality of the color of his veneers, our cabinetmaker also uses precious wood veneers from far away, in dark wood he used violet wood arranged at the bottom of the net and to form the decoration of the rooster crests, we also note the use of rosewood in the design of the cube marquetry as well as for the moldings of the quarter round framing the leaves and ebony on the musical instruments.
The frame of the cabinet also corresponds to a production 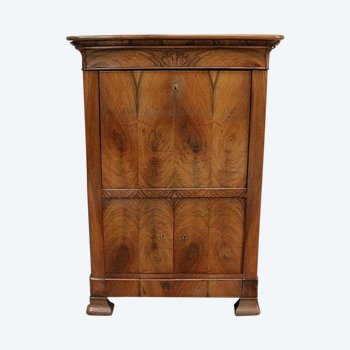 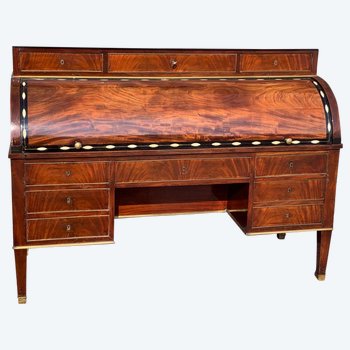 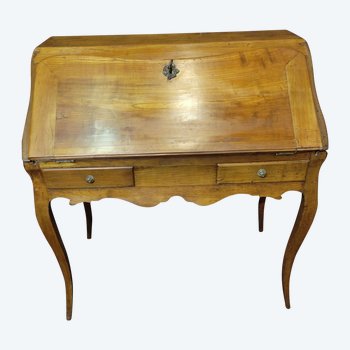 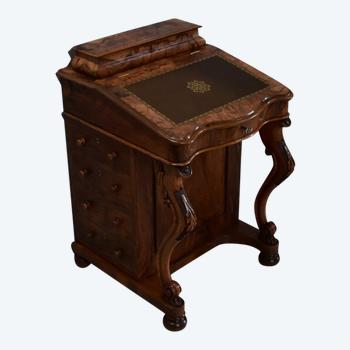 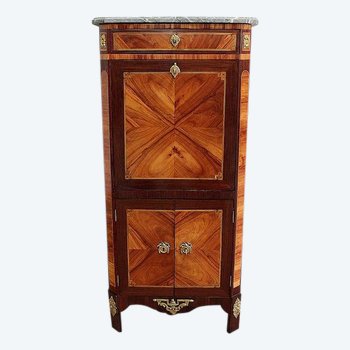 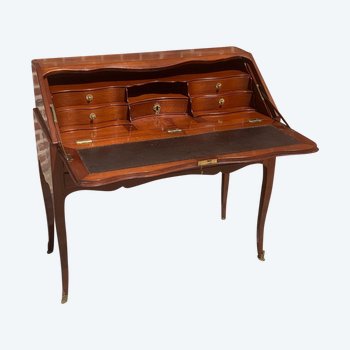