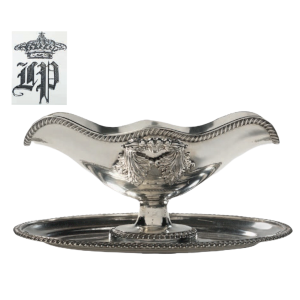 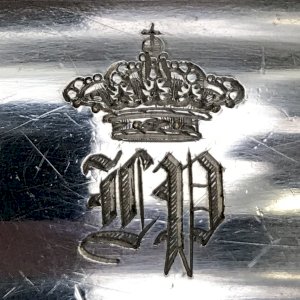 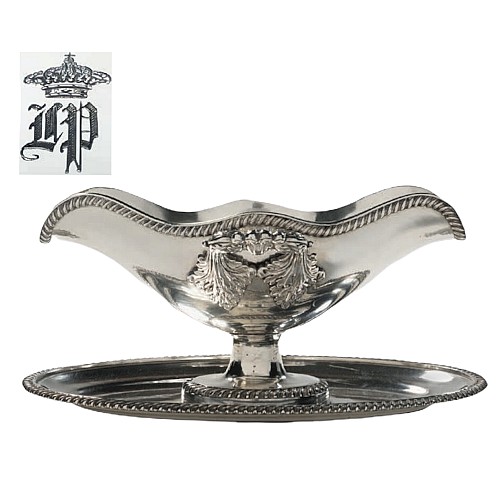 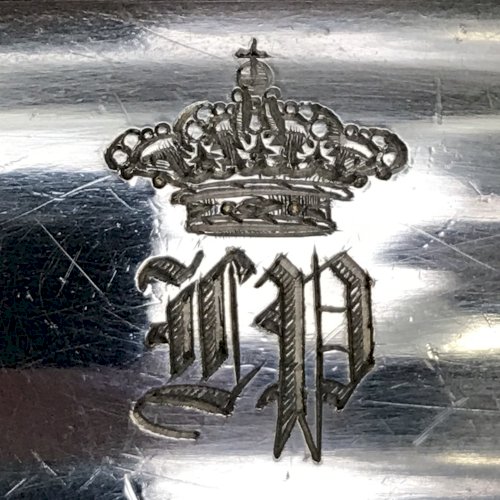 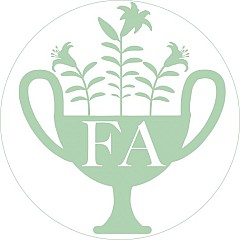 Jacques-Augustin GANDAIS, circa 1834.
SAUCIÈRE AND ITS TRAY ADHERED TO THE FIRST SILVER WORK SERVICE ORDERED BY LOUIS-PHILIPPE I, AS KING OF THE FRENCH (1830-1848).
The sovereign's initials, LP under royal crown engraved on the outer case back. Ribbed edging characteristic of the Gandais production. Silver-lined metal, slight traces of silvering on the underside of the plate.
Dimensions:
H.: 13 cm;
W: 27.5 cm;
width : 16.8 cm;
Certified provenance:
- Louis-Philippe Ier (1773-1850), King of the French
- his daughter, Clémentine d´Orléans (1817-1907), Princess of Saxe-Coburg and Gotha
- then by descent.

A ROYAL MONOGRAM-ENGRAVED SAUCE-BOAT AND STAND IN METAL LINED WITH SILVER BY JACQUES-AUGUSTIN GANDAIS, FOR THE FIRST SILVER TABLE SERVICE ORDERED BY LOUIS-PHILIPPE I, AS KING OF THE FRENCH (1830-1848).

About the Gand house:
Jacques-Augustin Gandais founded his goldsmith's factory in Paris in 1819. Specializing in the production of doubled or silver-plated metal, he brought this technique from England to France to such a high degree of excellence and innovation that he became its leading figure. The goldsmith's services he performed made silver-lined metal famous in France for their quality. Gandais covered the copper parts of the protruding parts of his models with strips of pure silver to prevent wear, just as he executed the feet and other ornaments on his parts in solid silver. In 1834, Louis-Philippe I was awarded the king's goldsmith-plasterer's certificate, who also made him a knight of the Legion of Honor. The jury of the Industrial Products Exhibition awarded him the Silver Medal in 1834 and 1844, and the National Industry Encouragement Society, a Silver and Gold Medal. Installed in the galleries of the Royal Palace, Gandais also delivered his production in other European courts, such as that of Queen Maria II da Gloria of Portugal. 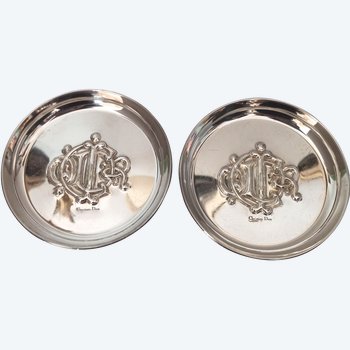 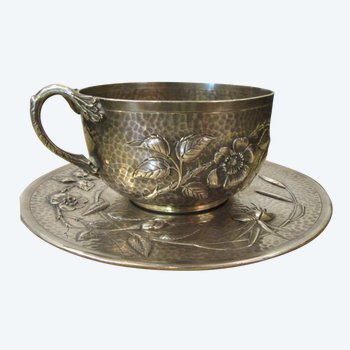 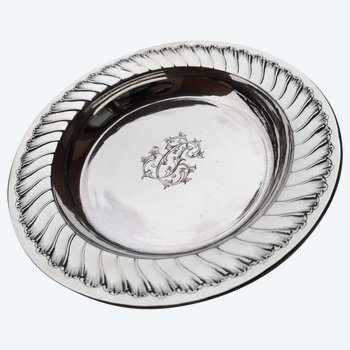 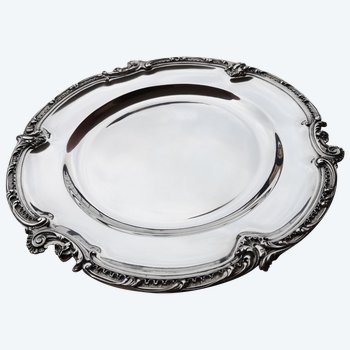 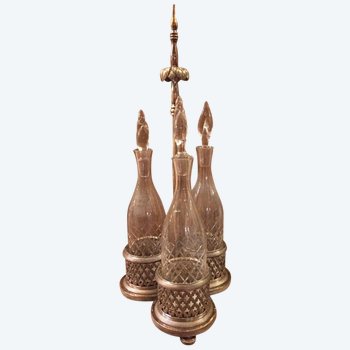 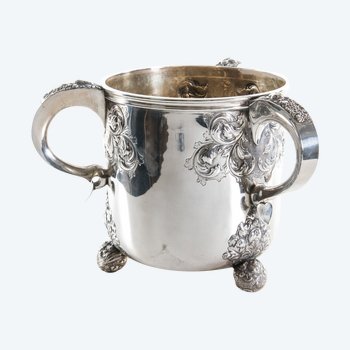 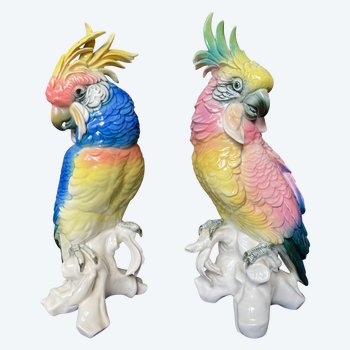 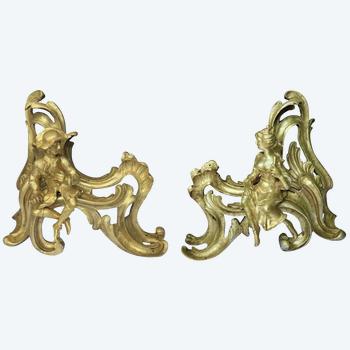 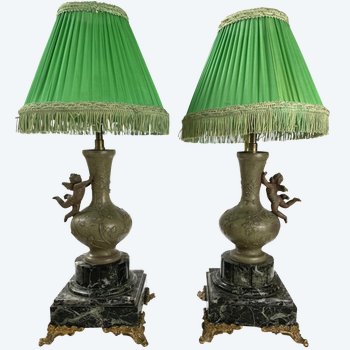 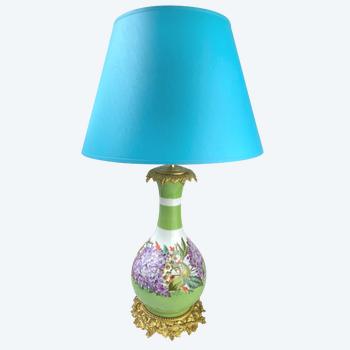 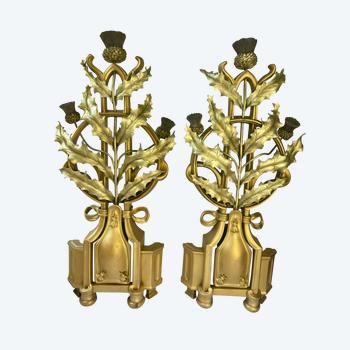 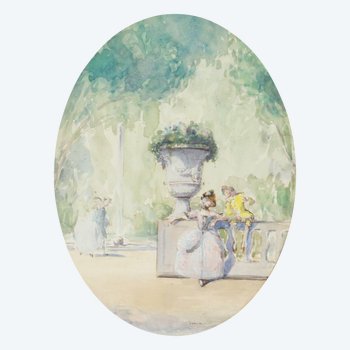 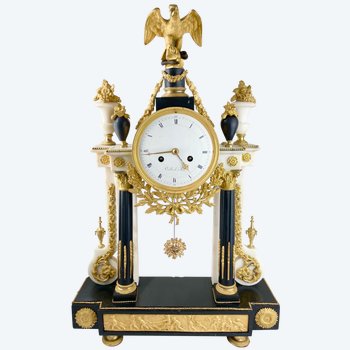 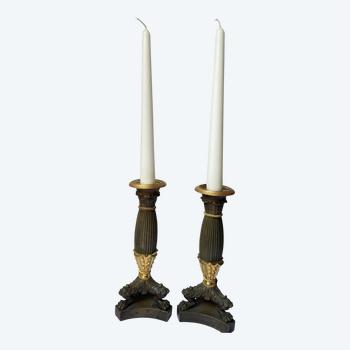